Why Do Trolls Eat Christians?

While some believe that Troll like to dine on Christian folk due to having acquired a taste for their rich and bountiful flesh, this is not the case.  Troll do not crave Christian meats particularly by flavor - generally preferring a nice plump goat.  But instead, Troll feel animosity towards the Christian, fueled by long standing feuds, and biting off the head of any given Christian, is among the quickest way to dispatch them to the next world.  And not being wasteful creatures by nature, the Troll, having off’ed any encountered Christian, will feast upon the human carcass - if goats are lacking.

It is said that the smell of a Christian so offends the nose of the Troll, that should the slightest whiff pass their nostrils, they immediately spring in blind rage in chase of its source.  But why?

In essence, the Troll, according to Norse mythology, feel that they have been wronged by the Christians, and misplaced by their Gods.  Prior to the rise of Christianity in Norway, Troll were worshiped as deities by the Norse people. And having been misplaced, the Troll, remain resentful...

Where Did Jesus Die? - The Alternative Japanese Legend 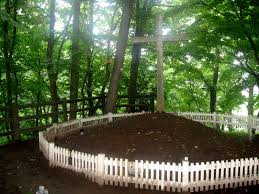 If, as a Christian (or otherwise) you’ve not heard the legend of ‘Jesus in Japan’, you’re no doubt not alone.  It’s something of a little known curiosity, and you certainly won’t have read about it in the Bible.  Because while most Christians believe that Jesus died on the cross, following crucifixion at Calvary (Golgotha), Jerusalem.  The Japanese legend is somewhat different...

The legend goes that Jesus did not die in Calvary, but that instead, one of his brothers took his place upon the cross, and that Jesus escaped across Siberia, to Japan - where he settled, married, became a rice farmer, and ultimately died.  And it is in the town ‘Shingo’, that those who believe in the legend say that the true grave of Jesus Christ can be found.

The town of Shingo, also known to some as ‘Kirisuto no Sato’ (Hometown of Christ) is (apart from the Jesus legend) known for little more than the garlic farms, and apple orchards abundant in the area.  So that while unspectacular in many ways, halfway up a local mountainside, surrounded by bamboo thickets, lies a mound of earth, surrounded by a white picket fence, adorned with a simple wooden cross.  And it is this humble monument that is said to be the true grave of the son of God.  Though with only around 1% of Japan’s population being Christian (with most being Buddhist), this belief in Jesus having died in Japan is not a particularly well known, or supported belief,  even within Japan.


One point of interest though, regarding the legend, is that with Jesus having said to have settled, and married in Shingo.  Jesus’s offspring, and descendants, are still said to live in the area.  Meaning that that nice portly gentleman serving you your apple ice-cream (should be visiting the area) might just have a touch of the divine about him - being the son, of the son, of a son, of the son of God.